Reports are out claiming that Arsenal insist they have no interest in former Chelsea boss Jose Mourinho. 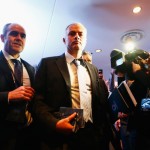 The Sun says Arsenal insiders have described the speculation as “absolute nonsense”.

Mourinho has been out of work since being given the boot by Chelsea in December.

He is expected to succeed Louis van Gaal at Manchester United this summer.