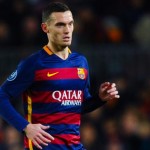 Reports are out claiming that Barcelona defender Thomas Vermaelen is looking forward to facing former club Arsenal in the Champions League this week.

The former Gunner returns to the Emirates this week for the first time since leaving north London in a £10million transfer in 2014.

While Vermaelen’s time at the Nou Camp has been ravaged by injury, delaying his debut for nine months and limiting him to just seven appearances, the 30-year-old played 110 times for Arsenal and holds the club in great esteem.

“It’s a special game for me,” he said. “It’s a match against a team that I spent five years of my life at and that I have great memories of. So it’s going to be special.”