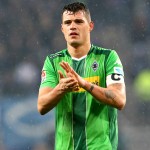 Reports have emerged claiming that Arsenal are closing a deal for Borussia Monchengladbach midfielder Granit Xhaka.

Sport1 revealed that Arsene Wenger has agreed a deal for the midfielder, claiming ‘everything is already fixed’.

They claim the move will cost Arsenal between £23m and £31m.

Arsenal have sent scouts to watch Xhaka more than 30 times this season and reportedly had a bid rejected last month.

The Switzerland international is under contract with the German club until 2019 but has previously revealed his desire to play in the Premier League.