Reports have emerged claiming that Arsenal are close to completing the signing of Napoli’s Algerian international Faouzi Ghoulam. 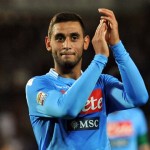 Marca is reporting that a deal between the two parties could be signed-off on before the end of the week, with Arsenal believed to be happy to meet Napoli’s £8million asking price for the left-back.

Chelsea, Paris Saint-Germain and Real Madrid have all been linked to the 24-year-old, but it is understood Ghoulam has opted to join the Gunners. Arsenal Striker Yaya Sanogo On The Verge Of Joining Ajax