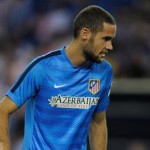 The Daily Mail reported that Arsenal are close to signing Atletico holding midfielder Suarez as Arsene Wenger begins his January spending spree, according to reports in Spain.

The Spanish international played 22 games last season as Atletico won La Liga and made it to the Champions League final, but has fallen out of favour this season.

With the likes of Gabi, Tiago, Raul Garcia and Saul Niguez ahead of him in the pecking order under Diego Simeone, the defensive midfielder is looking to move on.