Reports have emerged claiming that Kelechi Nwakali has signed with Arsenal. 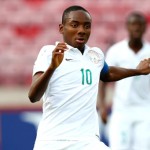 Nwakali has signed a five-year contract with Arsenal.

A £3m double deal for Under-17 World Cup winner Nwakali and team-mate Samuel Chukwueze has been in the pipeline for a number of weeks.

Arsene Wenger confirmed in January that the club were working to land the pair from the Diamond Football Academy in Nigeria.