It has been reported that Arsenal have signed Southampton defender Calum Chambers for a reported fee of £16m. 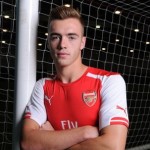 The 19 year old has signed a long-term deal with the Emirates club.

The fee was undisclosed but believed to be worth £16m, this despite the fact that the young full-back has only made 18 Premier League starts.

The England U19 captain has made his name as a full-back but can also play in midfield or as a centre-back.

“We are very pleased that Calum has agreed to join us. The way he adapted to the Premier League last season with Southampton at a young age shows that he has tremendous quality,” said Arsenal manager Arsene Wenger.

“He has a lot of the attributes that we look for in a young player and I am sure that he will do well with us.”

Chambers added: “I am so happy to be signing for Arsenal. They are a team I have much admired for their playing style, and a team who have been one of the top sides in Europe for many years. I’m looking forward to joining up with my new team-mates today and beginning preparation for the season ahead.”