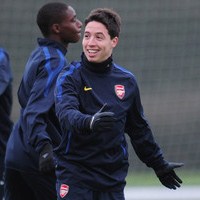 It is reported that Arsenal are becoming increasingly concerned that Samir Nasri will reject a new contract offer this summer.

The Daily Mail has revealed that the Gunners are now seeking a replacement for the midfielder, with Shakhtar Donetsk’s Willian among the candidates.

Nasri, whose current deal expires at the end of next season, has put talks over a new contract on hold until the end of the season and fears are beginning to surface that he may look to leave.

Arsene Wenger is optimistic the France international will put pen to paper on a new long-term deal – though certain members of the Arsenal hierarchy feel Nasri will give serious consideration to leaving if one of Europe’s elite clubs come in with a firm offer.

Barcelona, Inter Milan, Chelsea and Manchester City have all been linked with moves for the French forward in recent weeks.

If Nasri does not sign, Arsenal will look to sell this summer rather than run the risk of losing him for nothing at the end of next season.