Reports are out claiming that Arsenal want to prise goalkeeper coach Christophe Lollichon away from Chelsea. 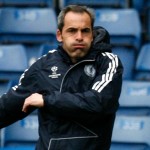 The Times reported that Lollichon could be set to join the Gunners to continue the partnership he has had with Petr Cech for over 10 years.

Lollichon came with Cech from Rennes to Chelsea last decade and would like to continue working with the man he helped become a Premier League and Champions League winner.

Arsenal are yet to find a replacement for keeper coach Tony Roberts, who left this summer for Swansea City.