Reports are out claiming that Arsenal believe they will soon tie Mesut Ozil down to a new deal. 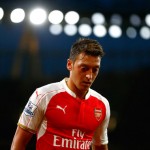 The German international playmaker has two-and-a-half years left on his current Gunners deal but according to ESPN FC, the North London club want to secure for him for even longer.

Arsenal has opened contract talks with Ozil, who joined from Real Madrid in 2013, and are confident they will come to an agreement over a long-term deal.

After an indifferent start to life in England, Ozil has emerged as the in-form attacking midfielder in the Premier League having provided 10 assists for the Gunners this season.