Reports are out claiming that Arsenal remain in the hunt for Real Madrid striker Karim Benzema. 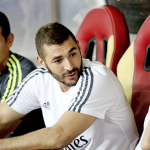 The Daily Star reported that the Gunners are confident of striking a deal for the £35m-rated Frenchman.

And the Spanish giants have now let it be known they are now ready to talk about selling Benzema.

Wenger’s claim he in not chasing Benzema’s signature is believed to be out of respect to Real.