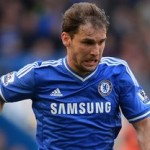 Interesting transfer news are out claiming that Arsenal have expressed interest in Chelsea defender Branislav Ivanovic.

The Daily Mail reported that the 30 year old Serbian international has hit an impasse with Chelsea in talks over a new contract but the Stamford Bridge club still rate him highly.

While Arsenal had hoped to find a solution at around £8m, the former Lokomotiv Moscow star is valued closer to £15m and would command wages of around £150,000 a week.


Arsene Wenger In Contact With Alexis Sanchez Agent In Brazil