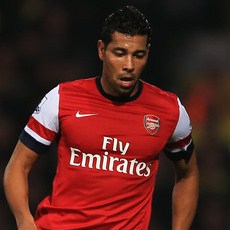 Gremio president Fabio Koff says the club are in talks with Arsenal about a deal to bring Andre Santos back to Brazil.

Santos has struggled to make an impact since joining Arsenal from Fenerbahce in 2011 and was linked with a January move to Galatasaray.

The 29-year-old is now a target for Gremio, with reports in Brazil suggesting Koff is hoping to secure the left-back on loan until December.

A deadline to sign players has been extended until Sunday by the Brazilian football federation and Koff is waiting on the outcome of negotiations with Arsenal.

“Andre Santos depends on being released by his club,” Koff told Radio Guaiba regarding the prospect of Gremio signing the former Corinthians defender.

“It’s a negotiation that advanced, then moved backwards. Let’s say we are interested and we had this well underway in advance.