It has been revealed that Arsenal have approached Newcastle United boss Rafa Benitez about next season. 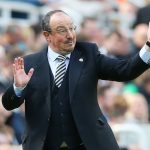 The Daily Mail revealed that intermediaries close to the club have begun to sound out candidates to replace Arsene Wenger.

And though Wenger looks more likely to stay now than go, the insecurity is putting Arsenal’s planning at risk, which is why a decision will be required soon.

Arsene Wenger The Main Person In My Career – Jack Wilshere