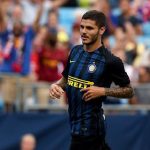 Reports are out claiming that Arsenal are holding more talks with reps for Inter Milan striker Mauro Icardi today.

The Sun says Arsene Wenger is desperate to land a striker this summer, with just a month left until the end to the transfer window.

Icardi’s missus Wanda Nara could be the rep in London today to help push through a move to the Emirates – having plotted an Inter boycott to force through the move.

Napoli are also chasing Argentinian forward Icardi and have issued an ultimatum to Inter with a take-it-or-leave-it proposal – with £60m on the table as well as a separate deal worth £42m plus Italy international striker Manolo Gabbiadini.

Arsenal, Tottenham To Do Battle For Josip Drmic