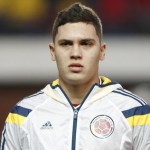 Earlier it today, it was believed that the Gunners were in talks to sign the 21-year old Colombian attacking midfielder for around £16million from the Portuguese giants.

However, Arsenal boss Arsene Wenger joked with reporters that perhaps Quintero could be on his way to one of the other major clubs in London.

“Maybe he will come in this room soon,” Wenger quipped.

“Maybe he goes somewhere else in London. There are many clubs in London.”

It is believed though that the Gunners are determined to lure the Los Cafeteros ace to north London following his impressive performances at the 2014 World Cup.

Quintero joined Porto from Italian club Pescara in the summer of 2013 and has since scored four goals and produced four assist in 34 outings in Portugal.