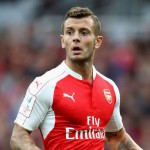 Reports are out claiming that injured Arsenal midfielder Jack Wilshere was among 40 players invited by England manager Roy Hodgson to a national team get together at St George’s Park ahead of Euro 2016.

Wilshere has not played for the Gunners this campaign after breaking his leg in pre-season, but it is understood Hodgson is willing to give the 24-year-old time to prove his fitness ahead of this summer’s European Championships.

The Daily Mirror is reporting Wilshere will be ready to return to action with Arsenal next month, opening the door for him to force his way into the Three Lions squad for the tournament.

However, it appears there will be no such opportunity for Manchester United left back Luke Shaw, after he was left off Hodgson’s original list of invitees to the St George’s Park gathering.

Shaw faces a battle to play again this season after breaking his leg in September and even if he returns to action for the Red Devils, is likely to be short of the match fitness needed for a major international tournament.