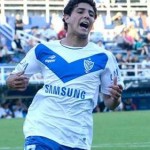 Reports have emerged claiming that Arsenal’s deal for Velez Sarsfield whizkid Maxi Romero is in doubt.

The Mirror says the 16-year-old Argentine ace – dubbed ‘the next Lionel Messi’ – has reportedly agreed a £4.5m move to Arsenal.

Romero is set to make the switch from Velez Sarsfield when he turns 18.

But those big plans could now be in doubt after Romero suffered a serious injury. He tore his ligaments in a recent Velez Sarsfield reserves game.