Chelsea skipper John Terry has admitted that losing to Arsenal in the Community Shield does “hurt”. 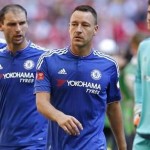 The champions were beaten 1-0 by the FA Cup winners at Wembley courtesy of Alex Oxlade-Chamberlain’s first-half goal.

“I thought we were on top, if anything,” Terry said.

“These games are always a bit slow with players finding their feet and fitness, but it’s disappointing we didn’t win.

“Losing is just horrible in all aspects… forgetting the record, it’s a trophy that’s gone now,’ he said. ‘It means a lot, because you’ve earned the right to be here so we’re just disappointed.

“It hurts. It doesn’t matter if it’s a friendly or the Community Shield – it’s a trophy at the end of the day.”

But when quizzed on whether Arsenal’s win could impact upon the title race ahead, Terry added: “I don’t think so. I think it’s one of them where they’ll probably come out and say differently. They do mean something, but win or lose, I don’t think you can say that (it will affect the league).”