Arsenal midfielders Jack Wilshere, Mikel Arteta and Aaron Ramsey is set to miss the upcoming games against Galatasaray and Chelsea after picking up injuries in the 1-1 draw against Tottenham. 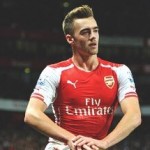 Young Calum Chambers, 19, looks likely to be used in midfield against Galatasaray in the Champions League to fill the void, but has been filling in for the injured Mathieu Debuchy at right-back and is one booking away from a suspension as well.

“He’s been excellent in every position. And from the first to the last minute he has an unbelievable engine. He gets forward and puts crosses in as well,” Wenger added.

“I would consider playing Calum there (in midfield). But I only have four defenders at the moment. I don’t know what I’ll do yet. Give me a bit of time, but [Mathieu] Flamini is the only option I see at the moment.

“It was a very harsh yellow card against Tottenham, and the one before at Villa was very harsh as well. It’s a shame you can’t appeal globally for the cards you get.

“I thought he played well and I will tell him to keep playing his game. The fact that he’s keen and committed maybe sometimes leads him to commit spectacular fouls.”