Gabriel Paulista has declared that he joined Arsenal to win the ‘biggest competitions’ in world football and he believes the Gunners have the squad to do it. 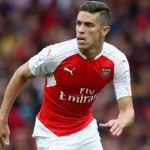 The 24-year-old Brazilian centre back has become a vital cog in Arsene Wenger’s squad since joining the North London club from Villarreal in January.

After featuring in Arsenal’s FA Cup winning side last season, Gabriel says he is hungry to win more silverware with the club.

“On the first day I arrived here I felt something special,” Gabriel told Arsenal’s official website.

“In reality, I think I always wanted to achieve the most important goals in the world and in the biggest competitions.

“When I got here, I saw that Arsenal have the ability to do it. We have great players to win the biggest competitions. I’m sure that me, my team-mates and everyone that works here will make history.

“I will have my name remembered here for my son and your sons to see that we won the Champions League, the Premier League, the best competitions, because Arsenal are capable of doing it.”