Reports are out claiming that Arsenal defender Gabriel has received a one-match ban after accepting a charge of improper conduct. 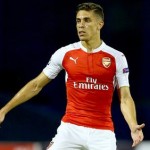 The 24-year-old made headlines last weekend after clashing with Diego Costa and picking up a red card for kicking out at the Chelsea forward in the Gunners’ ill-tempered 2-0 defeat.

The FA announced on Tuesday it had accepted Arsenal’s challenge to referee Mike Dean’s decision and withdrawn the three-match suspension, but the Brazilian defender has not escaped all punishment.

Gabriel has accepted a charge of improper conduct following the fall-out from his clash with Costa and will serve a one-match ban at Leicester this weekend.

The separate charge relates to his conduct after being shown the red card by referee Dean.

“Following an Independent Regulatory Commission hearing, Arsenal defender Gabriel will serve a one-match suspension with immediate effect after he admitted an FA charge of improper conduct,” a statement from the FA read.

“The charge relates to Gabriel’s behaviour following his dismissal in or around the 45th minute of the game against Chelsea on Saturday [19 September 2015].

“The player, who requested a personal hearing, was also fined £10,000 and warned as to his future conduct.”