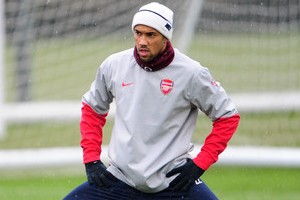 Arsenal left-back Gael Clichy has revealed that talks linking him with European champions FC Barcelona is humbling and flattering.

The France international has been linked with a £10million move to the Catalan giants and although he insists his future remains at Emirates Stadium, he said it was always nice to hear his name in the same sentence as some of the big clubs in Europe.

Clichy told reporters that : “It is great that these teams like Barcelona and Real Madrid are looking at me,”.

“They are great teams as everyone knows but all I want to say is that I am focused on the end of the season. I want to win something here. I have two years left on my contract so it is not a question to answer.”