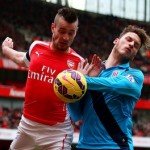 Reports are out claiming that Arsenal boss Arsene Wenger admits Mathieu Debuchy is “destroyed” over his shoulder dislocation.

The French international fullback faces three months out, having only just recovered from an ankle injury after three months on the sidelines.

“He is destroyed,” Wenger said.

“He is such a keen player, so professional and so willing.

“It is his first year here and of course he is embarrassed. But it is not his fault.”