It has been reported that Arsenal defender Per Mertesacker has explained his decision to retire from international football with Germany. 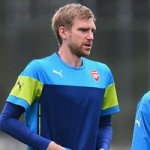 The 29 year old said he did so because he had achieved the ultimate triumph in international football and hopes to add to that success with Arsenal.

“We won it so I made my mind up after that,’ said Mertesacker, who won 104 caps for Germany. ‘To finish on a high was the main thing. It’s also a big relief to finish that and call time on my international career and concentrate on Arsenal. That is my main focus. I want to take these breaks, especially in September, October, November to refuel and recharge my engine, especially without a winter break. I have to take care of my body and that’s one of the reasons why I retired.

“It is really a retirement on a high after a really proud 10 years of international football. You have to be honest with yourself and when you feel that there is anything uncertain, you have to retire and that is what I did. After a couple of weeks’ break after the World Cup, I was just honest to myself. I want to play a good role at Arsenal, there is no doubt about that.” Antonio Conte Delighted To Be Appointed As New Italy Coach