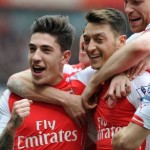 Reports are out claiming that Arsenal defender Per Mertesacker was happy for Hector Bellerin after his goalscoring performance in victory over Liverpool.

The Spanish full-back scored a sublime opener for the Gunners as they beat Liverpool 4-1 on Saturday.

“He scored the first goal and that was vital,” Mertesacker said.

“He’s given us a lot of energy this season. He’s stepped up because we’ve had a lot of injuries but he gave us such a great energy and he’s capable of producing great performances like today.

“To put in such a good performance in front of our fans makes me delighted. I’m proud of our performance because we kept going. It was a hard-fought win in the end and we deserved it with the way we played.”

I Don’t Miss Any Of Arsenal’s Games! – Cesc Fabregas