It has been reported that Arsenal defender Per Mertesacker is delighted for Danny Welbeck over his hat-trick performance. 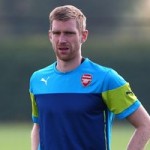 The former Manchester United stiker struck his treble in their Champions League rout of Galatasaray.

“He is the main threat at the moment, especially on the counter-attack,” said Mertesacker.

“We have players who can put him in the right situations and that is what we need to find ourselves.

“It took a bit of time, but I think now we are on (the) spot and we see what it takes to be a team and to be fully integrated.”