It has been reported that Arsenal defender Per Mertesacker hopes to take his FA Cup winning feeling into the World Cup. 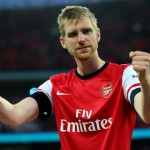 The German international centre back believes the club’s recent success can inspire him to become a World Champion this summer.

He told Kicker: “Winning the FA Cup has given me a lot of confidence. It has set me up to get another highlight, something which I can definitely achieve.

“We want to go further than we have been in previous competitions, those who have watched us know what that means. We don’t want to constantly only reach third place.”