It has been reported that Arsenal defender Thomas Vermaelen wants to move to Manchester United. 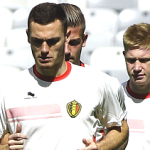 The Belgium international defender is also a target for Barcelona, but favours Old Trafford as his next destination.

The Daily Mail reported that he has an English girlfriend, model Polly Parsons, and a young son, and would like to be reunited with his good friend Robin van Persie.

He would also have more chance of playing regularly, which is the only factor motivating a move from the Emirates Stadium.

United manager Louis van Gaal wants Vermaelen to operate on the left of three centre-halves in a new-look United team.