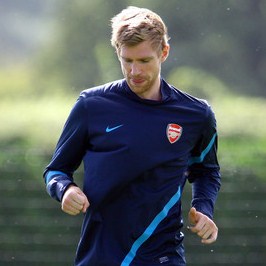 It has been revealed that Arsenal management were pleased with Per Mertesacker’s performance in their draw at Champions League opponents Borussia Dortmund.

The former Werder Bremen backed up his debut against Swansea City with a calm display in Germany.

Gunners No2 Pat Rice told arsenal.com: “Per, from my point of view, is a terrific player. The amount of games he has played for the German national side means he cannot be a bad player.

“It is impossible. He is showing that gradually with us. I thought he was terrific tonight alongside Laurent Koscielny and I can only see him getting better and better when he gets used to the Premier League.”

Ramsey Has An Unbelievable Engine! – Wenger Francis Coquelin Expected Back At Arsenal For Preseason