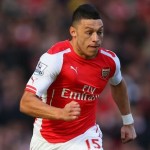 Reports are out claiming that Arsenal are hopeful of finding a solution to Alex Oxlade-Chamberlain’s recurring groin problem.

The England international star has been out of action for Arsenal since the FA Cup win over Manchester United last month and his return has been pushed further back after he suffered another injury setback.

It was later revealed that the 22-year old had suffered a recurrence of the groin problem which has been plaguing him throughout the current campaign.

While Oxlade-Chamberlain has played through the pain barrier, the problem could get worse if not treated properly and it has been revealed that the Gunners medical staff are working tirelessly in order to find a solution for the injury concern. Fabregas : Nasri Is In The Form Of His Life!