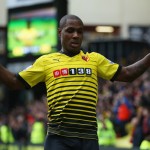 Reports are out claiming that Arsenal are watching Watford striker Odion Ighalo.

The Mirror says he has reportedly secured a ‘gentleman’s agreement’ with the Hornets amid interest from Chelsea and Manchester United.

But Arsene Wenger is hot on Ighalo and keenly following his progress.

Watford could consider cashing in if they receive an offer in the region of £20m.

However, United could have the upper hand as Ighalo revealed last month that his dream is to play for the Red Devils.

“There has been speculation from Spain and Italy but I’ve played there and now want to play in England,” the Nigeria international said.

“I don’t think I will be moving but I’m not sure I’d say no if United called.

“They were my team growing up. I loved watching Andy Cole and Dwight Yorke on TV.

“They were my idols and playing at Old Trafford has always been a dream.”


Arsenal, Tottenham To Do Battle For Newcastle Goalkeeper Freddie Woodman