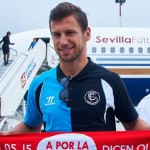 Reports are out claiming that Arsenal are reviving their bid for Sevilla midfielder Grzegorz Krychowiak.

The Times claims that Krychowiak has a £21m release clause in his contract.

Manchester United are also said to be tracking the Polish international, who won the Europa League with the Spanish outfit this season.

It is claimed that Wenger has been monitoring Krychowiak’s development since he moved to France as a youngster to join Bordeaux’s academy.

And according to the reports, Wenger is keen to act fast to tie up a deal to both beat United to the star and get his transfer business out of the way early.