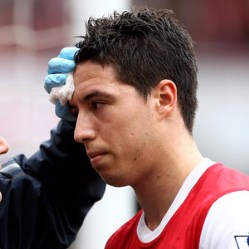 It has been reported that Arsenal are returning to the negotiating table with Samir Nasri.

The London Evening Standard reported that Gunners boss Arsene Wenger is keen to avoid the French international joining Manchester United with reports suggesting the champions have made a £10m bid.

However, another meeting is scheduled between Arsenal and Nasri’s representatives.

Wenger Proud of Arsenal’s “quality, spirit and heart” against Swansea