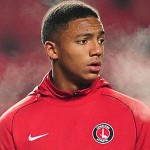 The youngster is rated among the brightest talents outside the Premier League.

The 17 year-old centre-half is being watched by Gunners scouts leading up to the summer market.

Newcastle have also been linked with Gomez, a regular with the England squad at his age group.

He has also been a regular in Charlton’s first-team this season in the Championship.