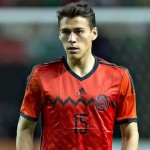 Wenger will struggle to convince the 26-year-old to join the Emirates, with Red Devils’ Louis van Gaal and Spurs’ Mauricio Pochettino having already managed him at AZ and Espanyol respectively.

The La Liga outfit are reportedly looking for at least £6m to consider the sale of Moreno, who is keen to join a new club.