It has been reported that Arsenal boss Arsene Wenger refuses to give up on landing Real Madrid striker Alvaro Morata in January. 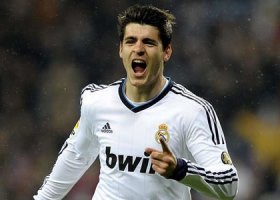 The Telegraph reported that both Morata and Karim Benzema have figured on Wenger’s list of striker targets, but Carlo Ancelotti, the Real manager, does not want to lose either player in January.

However, Arsenal have not completely given up hope of signing Morata next month.

Nicklas Bendtner : I Never Said I Am The Best Striker In The World!