Cesc Fabregas has revealed that former club Arsenal told him he was not required when he was seeking a return to north London this summer. 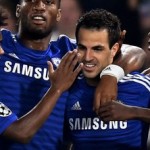 The 27-year old Spanish midfielder left Barcelona to join Chelsea in June but not before he was advised by the Gunners that their first option on him would not be taken up as they already had Mesut Ozil on the books.

Fabregas, who has started the 2014/15 Premier League season in fine form, admits he would have liked to return to the Emirates Stadium but says he had to think of himself when it became apparent that Arsene Wenger would pass on him.

“I was always going back to the Premier League because, to me, there’s no other league around the world that’s better than it,” Fabregas told The Sun.

“Arsenal had the first option – it was written in the contract – and so they could have said ‘yes’ but they decided not to. They told me now Ozil was there, there was no need for me.

“That’s life. No problem. We move on. Life moves on. Football moves on.

“Changing clubs is part of the game and people must remember it was Arsenal who didn’t take up the buy-back option for me.

“Any team I would have gone to, apart from Arsenal, it would have been bad to them.”