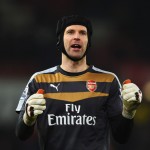 Reports have emerged claiming that Arsenal goalkeeper Petr Cech claims that the Gunners dropped two valuable points in the 1-1 draw against Crystal Palace on Sunday.

The Czech goalkeeper attracted criticism from some quarters for allowing Yannick Bolasie’s shot into his net in the second half of the game, however, he contests that he couldn’t have done better when attempting the save.

“He [Bolasie] fired it along the floor, the ball skidded very fast,” Cech told Sky Sports. “I got a touch but the ball was already behind me.”

Cech also suggested that Arsenal had opportunities to kill off the game after Alexis Sanchez’s opener which came late in the first half.

“We had chances to score the second goal but didn’t find the back of the net,” he added.

“They had several counter attacks but we were dealing very well with them. They have been waiting for a counter attack all game, but unfortunately they managed to find one with a goal.

“We should have seen the game off. This is two dropped points.”