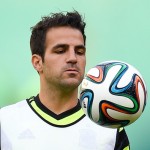 Reports are out claiming that Arsenal boss Arsene Wenger is in line for a tidy little windfall from Cesc Fabregas’ £32m transfer to Chelsea.

According to the People, the Gunners are due a £1.5m sell-on payment from Barcelona, who lured the Spanish star home for £30m three years ago.

The Blues hope to confirm Fabregas’ signing on a four-year contract in the next 48 hours after the Gunners indicated they did not want to sign the midfielder for a second time.