Reports are out claiming that Arsenal have been dealt a serious injury blow as the duo of Alexis Sanchez and Santi Cazorla are set to miss out the crucial Champions League encounter with Olympiakos. 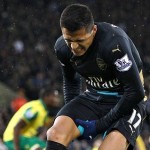 Both players picked up injuries during the 1-1 draw with Norwich City on Sunday.

Striker Sanchez is set to miss three weeks with a hamstring strain while playmaker Cazorla is still waiting for scan results of the knee injury he suffered at Carrow Road.

Arsenal take on Greek side Olympiakos in Athens on December 9, requiring a victory by two goals or more to book their place in the Round of 16 of Europe’s premier club competition.