It has been reported that Real Madrid midfielder Sami Khedira is dropping his personal demands in talks with Arsenal. 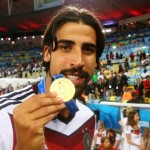 The Daily Star reported that the German international has lowered his wage demands in an effort to push through an exit from the Bernabeu.

Khedira has grown disillusioned in the Spanish capital following the signing of international team-mate Toni Kroos and the refusal to extend his contract, which currently runs until next season.

Gunners boss Arsene Wenger was keen to make Khedira his new midfield general but was unable to agree to the 27-year-old’s wage demands.