Reports are out claiming that Arsenal’s hopes of landing Paris Saint-Germain forward Ezequiel Lavezzi have received a lift after he revealed plans to leave Parc des Princes at the end of the season. 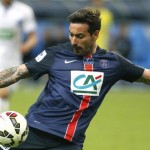 The Argentine international’s contract expires at the end of the current campaign, meaning he will be available on a free transfer.

Lavezzi told French broadcaster Telefoot : “I think it’s my last year in Paris. But I’m okay and I want to finish it the best way possible. You never know what can happen. Today I want to stay, tomorrow we’ll see,”.

The Gunners had been linked with a move for the 30-year-old during the summer transfer window, but could now land Lavezzi next offseason without having to splash out on a transfer fee.