It has been reported that Real Madrid striker Karim Benzema could be on his way to Arsenal in January. 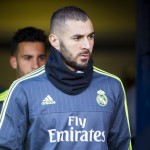 El Confidencial says due to the striker’s ongoing court case for the alleged blackmailing on France team-mate Mathieu Valbuena, the striker could be allowed to leave Real Madrid.

It is believed that Los Blancos could finally be willing to offload their No.9 as the situation unravels.

Arsenal are still in need of a new striker and despite his dealings off the pitch, the 28-year-old could be the perfect man for Arsene Wenger.