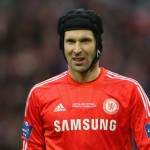 Cech has been linked with Arsenal this summer.

“Petr Cech is not a player, he’s an institution,” said Mourinho. “It’s different – 10 years in goal, going through everything he went through, great moments and sad moments, dying on the pitch. With institutions, you have to deal with things in a different manner.

“I think he won the right to be part of a discussion and a decision. He deserves a special perspective.”