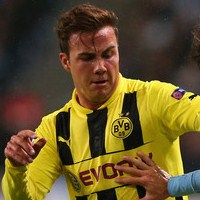 Reports are out claiming that Arsenal are being encouraged to try again for Borussia Dortmund star Mario Gotze.

It is said that the Gunners offered the German champions £32m for the midfielder in the summer of 2011 but the bid was rejected.

The 20 year old then extended his deal with Dortmund in March, tying him to the club until 2016.

And according to BILD, the new contract includes a buyout clause of £30m – £2m less than the figure Arsenal offered last year.

The clause expires in July and interested clubs are required to submit a written offer by the end of April 2013.


Leighton Baines Out With Hamstring Injury After Arsenal Draw