Reports are out claiming that Arsenal are becoming slowly engulfed by in-fighting at academy level. 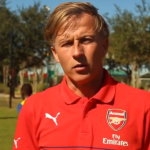 The Daily Mail says an increased presence from senior members of the Arsenal hierarchy has seen theme monitor the performance of the coaching staff in recent weeks.

Academy manager Andries Jonker, Under 18 coach Frans de Kat and Under 16 coach Jan van Loon all arrived in July 2014 to great hullabaloo. They had worked with the Dutch FA at various times during their careers and promised to tailor some of their principles to suit the young stars at Arsenal.

Instead a division is emerging, with the trio having very different ideas on player development than head of scouting Steve Morrow and Shaun O’Connor, who has returned as recruitment co-ordinator.

Parents are also complaining about the lack of game-time for their children.