It has been reported that Arsenal have enjoyed a bumper windfall from Barcelona’s sale of Cesc Fabregas to Chelsea. 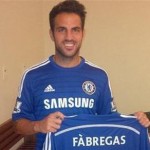 The Daily Mail revealed that Fabregas completed his shock £30million switch to Chelsea yesterday and confirmed Arsenal snubbed the chance to re-sign him.

However, the blow of seeing Fabregas in a Chelsea shirt has been softened by a hefty £5.6million windfall as part of the Spaniard’s move to Stamford Bridge.

In what is one of the most unexpected moves of the summer so far, the Spain international has signed a five-year deal at Stamford Bridge, understood to be worth in the region of £150,000-per-week.