Reports have emerged claiming that Everton and Arsenal are keen on Chelsea midfielder Lucas Piazon. 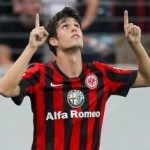 The 20 year old Brazilian is currently impressing on-loan in Germany with Eintracht Frankfurt.

Lancenet claims that his form has attracted the interest of Arsenal and Everton, along with Russia’s Zenit St Petersburg.

“We will hold talks in any case. I can imagine that Chelsea will perhaps loan him to us for longer. That would be in our interest, because he has shown what he can do,” Eintracht manager Bruno Hübner said last week.

“I also believe that the Bundesliga is the right platform for him, because here his playing skills suit the robust football played.

“If Lucas learns here to prevail, then he can make the big step (to Chelsea).”