Reports are out claiming that Swansea City have slapped a £20 million price-tag on Wilfried Bony. 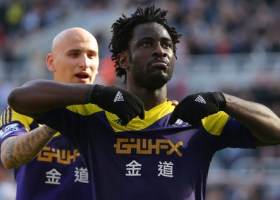 The People reported that Gunners boss Arsene Wenger has the Ivory Coast international high on his shortlist for a new striker.

Swans signed Bony from Vitesse for £12m last summer and his value has soared with him scoring 15 league goals, alerting a host of clubs – also including Everton.

If Arsenal make a firm offer, Bony could be forced to make a big decision over his future.